Precision soil analysis and satellite imagery are shortening the time needed to assess a site while improving management for the long-term.

At roughly £30,000 per hectare, planting a vineyard is not for the faint hearted but proper preparation and clever use of data can at least ensure it is money spent wisely.

Data of the sort provided by RHIZA has been used by farmers for the efficient production of crops such as wheat and potatoes for many years. The value it provides is increasingly being utilised by vine growers because it brings management into the modern age.

“There are those that inform the direction of thinking beginning with site assessment through to planting and those that enable the efficient use of inputs for the maintenance of healthy and productive vines,” says Mr Foster.

Initial assessments such as electro conductivity testing serve as the for subsequent soil testing and provide a detailed assessment of the variation within a field. 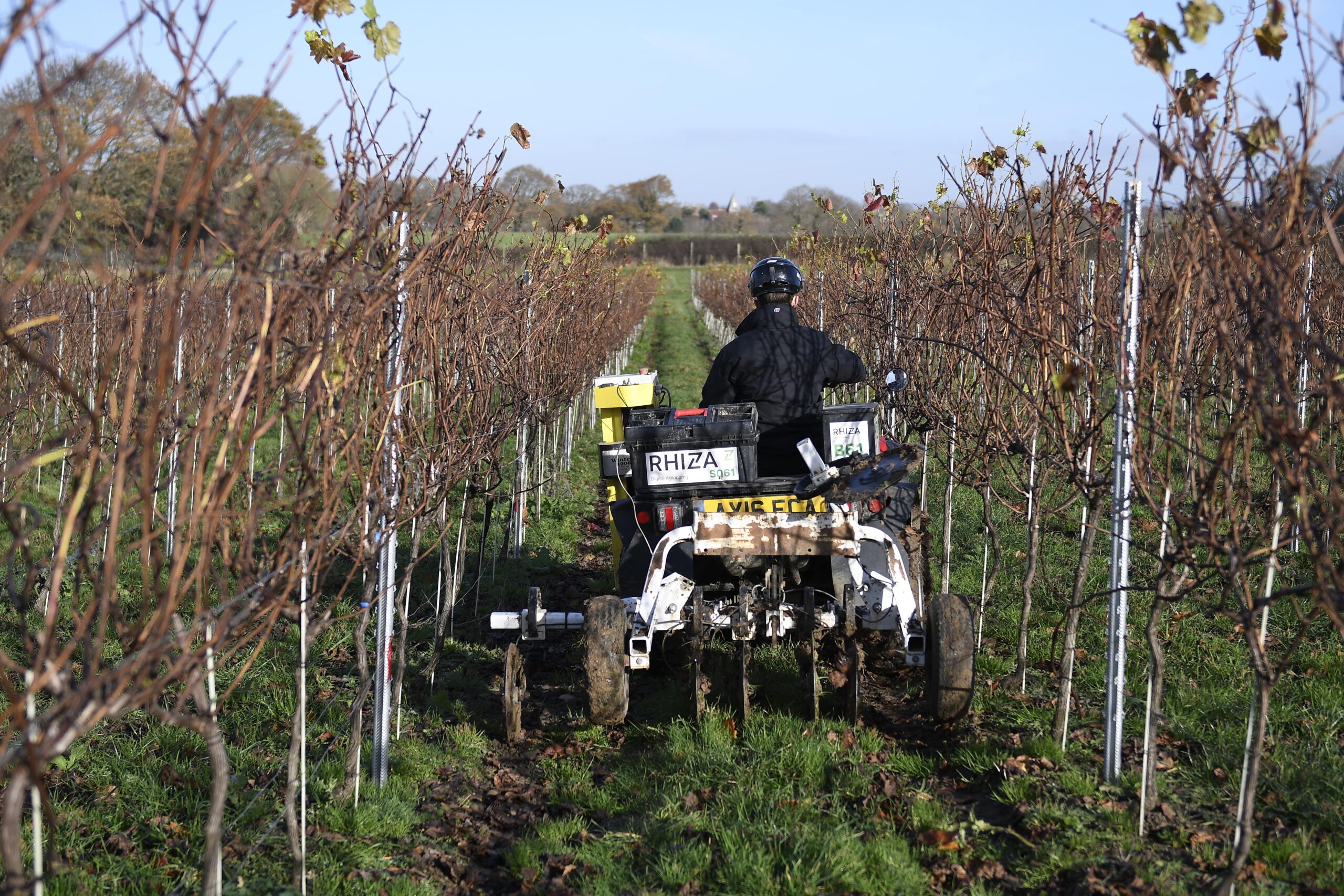 Electro conductivity testing enables the soil to be zoned based on soil texture and nutrient status.

Once a site is identified and entered on to the RHIZA platform, historical data specific to that location such as Satellite imagery, weather data and Cranfield soil data is  available. This information is considered alongside altitude, aspect and wind exposure to determine frost risk.

“Frost is the single biggest threat to vines. Having accurate data going back several years is invaluable when assessing site potential,” Benjamin says.

“Fields are then ‘divided’ into half-hectare management zones based on the soil variation maps. These areas are then soil sampled  to establish the levels of phosphate, potash, magnesium and pH of the soil. A soil laser texture analysis provides a definitive assessment of the sand, silt, and clay ratios for the soil in a given zone,”

“Other measurements, such as Calcium Carbonate & Chlorotic Power Index (IPC)  are also of value as these greatly influence Root stock selection,

As well as theses analysis Soil Organic matter levels should be analysed and monitored as this will indicate moisture holding capacity and nutrient availability,” he adds. 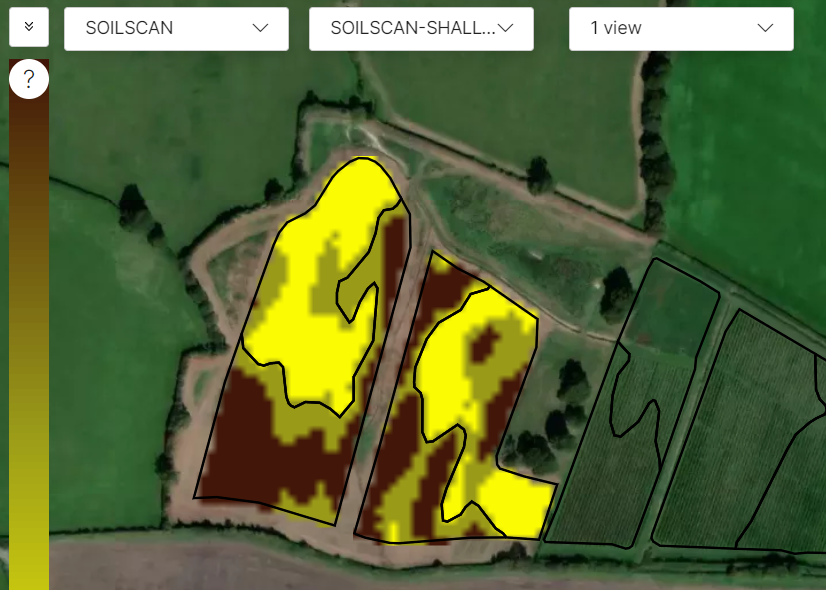 Different colours are used to highlight variation in Soil type at varying depths.

“Frost is the single biggest threat to vines. Having accurate data going back several years is invaluable when assessing site potential.”

For Benjamin Brown, vineyard agronomist with crop advisers and trials specialists, Agrii, a sound understanding of the soil properties of any given site is the basis for informed management.

“The biggest influence on any crop is always climate and soil. We use the information from RHIZA to identify the vines best suited to the terroir. Traditionally, sparkling wines have thrived on the chalk soils of the Champagne region where the soils support a balanced aromatic profile enjoyed by consumers. Conversely, water-limited soils tend to produce grapes with more desirable phenolic characteristics and higher quality tannins which is why red wines do better on soils where moisture can be in deficit,” Mr Brown says.

Having assessed the site based on its topography, altitude, aspect and wind exposure, all of which are derived from RHIZA, the planting direction and row spacing is considered. But there is a dichotomy to consider, warns Benjamin Brown.

“The advantage of higher sites is reduced frost risk, but the grapes will also ripen more slowly as temperatures are generally lower, and growth and development are slower than at lower altitudes. Up to 125 metres above sea level is generally safe, but the risk at lower altitudes, especially on sheltered sites such as valleys, is the increased chance of frost. Everything feasible should be done to avoid planting vines on sites with high frost risk,” he says.

An important feature of any site is drainage. Mr Brown believes this is too often over-looked. On poorly draining sites, there is a risk that roots will spend much of the winter in water-logged soils which will cause them to die. This can lead to problems in future years and result in reduced nutrient uptake.

Cover crops that occupy the space between rows is another consideration. Where these are chosen with care, they can bring positive benefits.

“Vines take up only a fraction of the surface area so thought should be given to what to sow in the area between rows. It needs to be slow growing so as not to create much work for the manager or owner, hardy so machinery can travel over it, not hungry for nutrients or thirsty for moisture and not fiercely competitive,” says Mr Brown.

“We also want to show preference for those that improve soil structure and promote soil fertility. This is a demanding set of characteristics and often contrary to what most plants are bred to exhibit, but there are a few species well-suited to the role,” he adds.

Some mustard species, such as bronze mustards, work well between rows. “These preserve soil moisture and raise the pH. This means they are well-suited to chalky soils, but less suitable to acidic soils,” he says.

Crop protection and growth promoting products are another aspect of management where good site data can support product selection and application best practice.

Several forms of biostimulants such as the elicitor, ProAct have been shown to improve disease tolerance and reduce severity through greater calcium absorption. Other biological products, such as OvinAlp support soil microbe activity and improve nitrogen use efficiency.

“Like all plants, there are disease and pest threats that will need managing, but where possible we seek to use biological forms of crop protection. Making the most of what these products have to contribute often means applying them proactively, rather than reactively,” Mr Brown says.

“To support timing, we rely on accurate forecast and modelling systems. These are often reliant on data such as the weather and other atmospheric conditions which is another example of where RHIZA helps growers to optimise the timing of crop inputs,” he adds.

NDVI images display the level of vegetation across a crop viewed from above. These images are used across all crop production systems to identify areas in need of management such as Variable rate applications.  In vines, NDVI imagery can be used to assess vigour within the vineyard and guide pruning. These initial assessments can be verified by visual inspection in a process known as ‘ground-truthing’.

From here you can decide which pruning method would best suit the vines for a given area and where it may be better to put more buds down the following season, to manage vigour.

“There will be relationships between what is above ground with what is below. By overlaying NDVI imagery with the soil maps, we can establish why some areas are stronger or weaker than others.  Where its weaker, we may put less buds down or prune it differently but having the data to draw on is essential to making informed decisions. Another example would be using the number of degree days year-on-year to forecast flowering and harvest dates,” Mr Foster says. 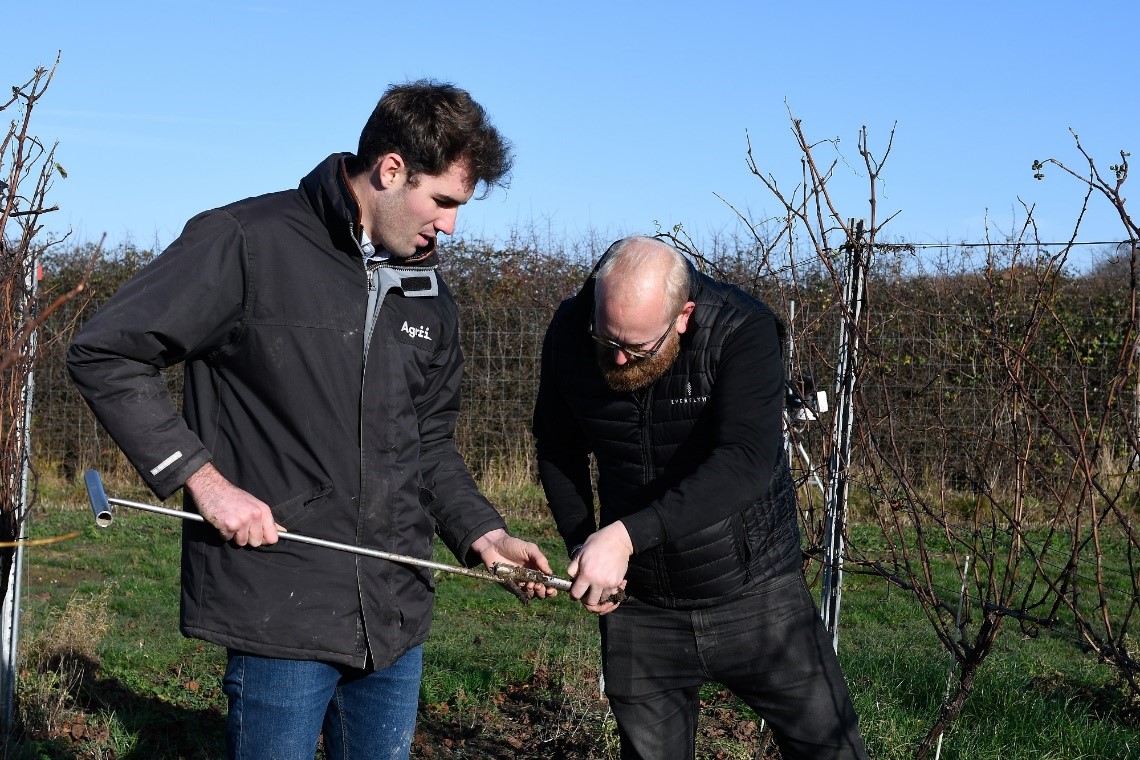 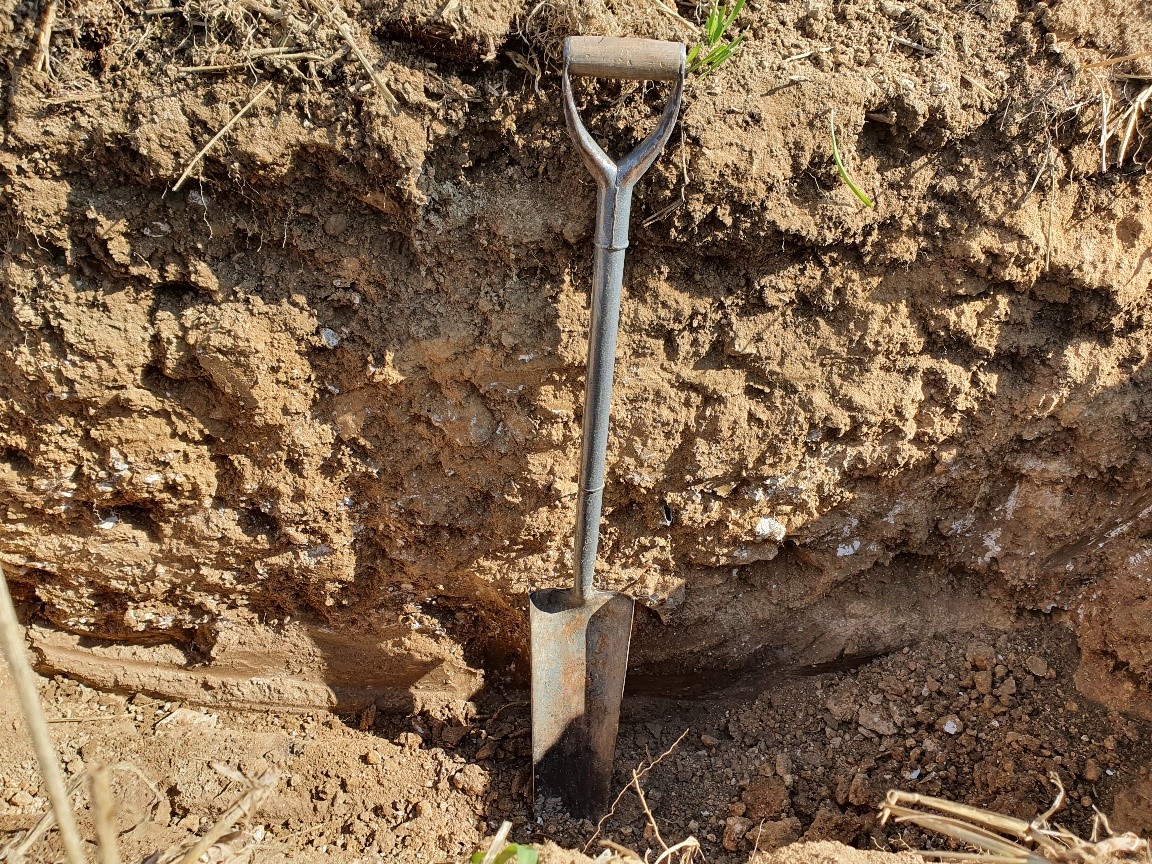 Soil pit digs provide a visual indication of the underlying soil type and its structure.

At its most basic level, using data in this way is about aiding management decisions, but also about achieving a balance between yield and quality. The UK climate does not favour big yields of the sort seen in more warmer regions of the world, but it does favour quality. Striking a balance between yield and quality optimises the financial return to the grower.

“In practice, this can come down to something as simple as having the right leaf area to support ripening for the local climate. Good data means we can achieve it more accurately and with greater confidence,” Mr Brown says.

Accumulated degree days can be used to forecast flowering and harvest.